Celebrating the peace within is Shivaratri

Today is Maha Shivaratri and the whole Art of Living Webteam wishes you all a very Happy Shivaratri:)

Shivarathri means ‘the night of Shiva’ and is observed in honour of Lord Shiva (The meditative aspect of the Universe).  According to the legend from Shivapurana, when Shiva was asked by Parvathi what pleases him most, He is supposed to have replied thus: ‘The 14th night of the new moon, in the dark fortnight during the month of phalgun, is my most favorite day. It is known as Shivarathri'.

Shiva is the meditative aspect of the entire Universe. Shiva pervades the entire Universe. He is in every atom of the Universe. He has no form but is in every form, so full of compassion. Ling means symbol (chinha in Hindi) that is how it’s come to be used as in Striling, Pulling, (female and male gender) Chinha means that through which you can recognize the whole consciousness represented in the Ling.  In Tamil there is a saying “Anbe Shivan, Shivan Anbe” means Shiva is love and love is Shiva, the soul of the creation called Isha or Shiva.

The devotees, in order to bring balance in the rajas (The primordial guna which brings forth activity) and Tamas(The primordial guna which brings forth inertia), and to uplift sattva (The primordial guna which gets the tasks accomplished), observe fast on this day. They keep awake at night and Shiva Lingam is worshipped throughout the night by washing it every three hours with milk, curd, honey, rose water, etc. whilst the chanting of Om Namah Shivaya continues. Bael leaves considered sacred to Lord Shiva are offered.  Hymns in praise of Lord Shiva are sung.  The traditional ritual is done to bring auspicious energy on the Earth and enriches the space within. However, the devotion plays the utmost role. The Om Namah Chanting is done to harmonize the five elements in the environment. 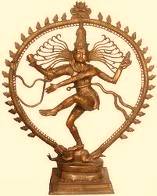 (Sri Sri has once spoken about the mind behind this beautiful idol - We will share in a different post)
The consciousness which is bliss, innocence, omnipresent and the bestower of dispassion is Shiva. The whole world is moving in an auspicious rhythm of innocence and intelligence, that is Shiva – the permanent and eternal source of energy, the eternal state of Being, the one and only one.

Like sponge in water, rasagulla in syrup, when mind and bodies are in Shiva tatva, small wishes get fulfilled effortlessly, one should keep big wishes.
Someone once asked why Shivratri (night of Shiva) and not Shiva din (day of Shiva),

Ratri means that which gives rest, takes you into its lap and comfort.  Night is always comforting, all activities have stopped, everything is quiet, peaceful, even the crows are not crowing, environment becomes quiet, body gets tired and goes to sleep. Shivaratri is a rest which is so deep! When the mind, intellect and ego rests in the Divine that is the real rest.
Ratri has a different meaning actually – that which gives relief from the three types of problems is Ratri.  What are the three things? Shanti, Shanti, Shanti: Peace to the body, to the mind and to the soul - adhyatmik, adhibhoutik and adidaivik.  Three types of peace are needed; one is material peace, if there is disturbance around you, you cannot sit and stay peaceful. You need peace in your environment, and you need peace in the body and mind. Third thing is peace in the soul.  You may have peace in the atmosphere, you may enjoy health in the body, to an extent peace in the mind, but if the soul is restless, nothing can comfort.  So that peace is also essential. Only in the presence of all the three types of peace can there be complete peace.  Without one, the other is incomplete.
Shivaratri is transcendental, divine consciousness which brings solace to all layers of
consciousness.  Resting in the Shiva tatva is Shivaratri.

© The Art of Living Foundation

Blogs in Other Languages